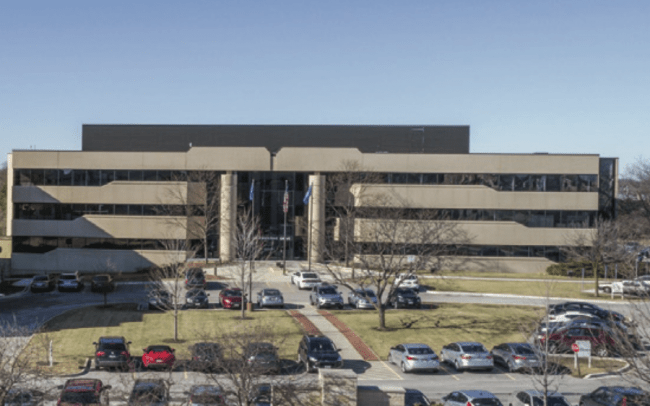 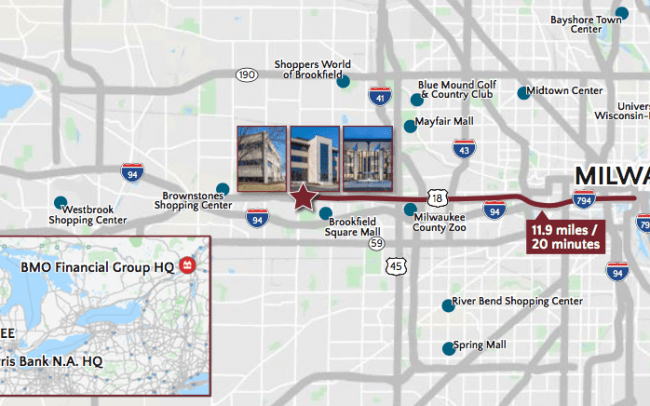 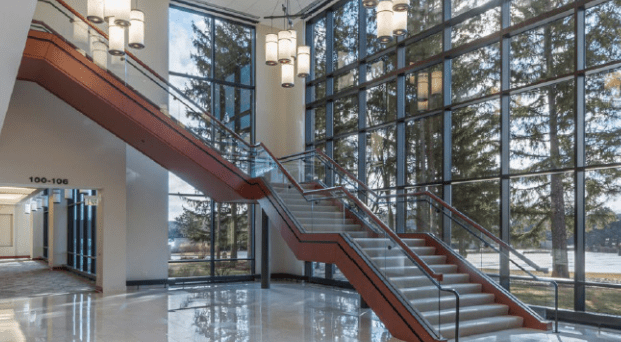 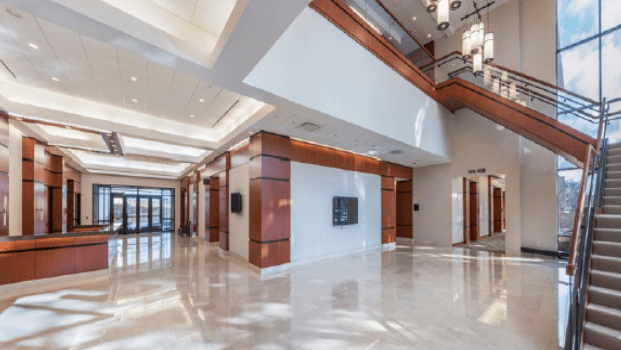 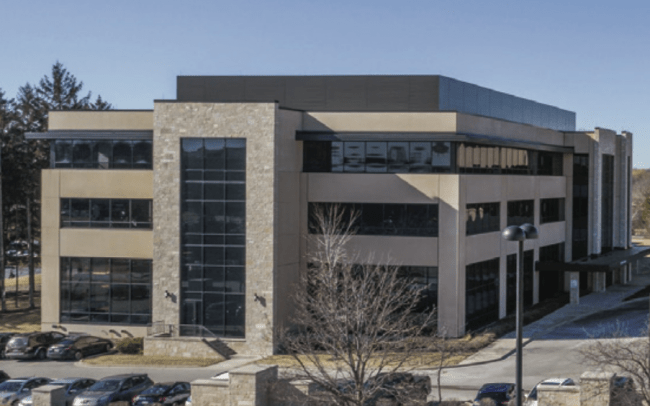 Investment Grade Tenant: BMO Harris Bank N.A. (BMO) long- term deposits rated A1 by Moody’s and AA by Fitch, senior debt rated Baa1 by Moody’s, A+ by Standard & Poors, and AA- by Fitch(1). BMO is the U.S. operating arm and subsidiary of the Bank of Montreal and is one of the largest banks in the Midwest with assets of over $129.6 billion, and over 13,000 employees.

Long-Term Lease / Minimal Landlord Obligations: BMO Harris Bank signed a 15-year lease via a sale / leaseback in July 2017 with almost 13 years remaining. Annual base rent increases of 2% provide steadily increasing revenues. Landlord has only a de ned nominal exposure to capital costs that do not commence until February 1, 2031.

Established Presence and Commitment to Location: BMO, through its acquisition of Marshall & Ilsley Corporation (M&I), has operated at 395 / 401 North Executive Drive since March 2011, and since 2006 at 180 North Executive Drive via M&I. BMO consolidated several of its bank operations and relocated employees to the Property as part of an overall strategic plan to create an operational hub in Brookfield, WI.

Significant Tenant Capital Investment: Over the past 5 years, BMO has spent several million dollars on base building capital replacements, and indicated it plans to make additional investments in interior renovations and upgrades.

Affluent Community and Strong Economic Fundamentals: Average household income within a 3-mile radius of $128,444 with 43% of households exceeding $100,000. 52% of the adult population holds bachelors or advanced degrees.

Strong Suburban Office Market: At over 7 million square feet, Brook eld/New Berlin is the largest suburban of ce market in the Milwaukee region.

According to the appraisals, the Milwaukee office market’s vacancy is still near the current cycle’s low point, which was at the end of 2018. However, since the start of 2018, rents have not grown significantly. New construction is primarily build-to-suit. Poor net migration and below-average job growth are contributing factors to this overall slow market.

Brookfield is located 10 miles west of and easily accessible to downtown Milwaukee. It has a daytime population of approximately 80,000 people due to its office, retail, and entertainment activity including the one million square foot Brookfield Square Mall, Wisconsin’s premier shopping destination. Development proximate to the Portfolio includes a 54,000 SF multipurpose conference center with an adjacent hotel, estimated to be complete in 2020. Brookfield is accessible via several major roadways including interstates 94, 41 and 43, state route 18, as well as bus service via the Waukesha Metro Transit Authority that provides frequent service to the Property. Brookfield/New Berlin is Milwaukee’s largest suburban submarket, at over seven million square feet. The vast majority of the submarket’s institutional-grade office property resides on the Brook eld (i.e., north) side of I-94, along the Bluemound Road corridor.

The City of Brookfield, Wisconsin is the third largest city in Waukesha County and is located roughly 10 miles west of downtown Milwaukee. Brookfield features an affluent and educated population. The average household income within a 3-mile radius is $128,444 with 43% of households exceeding $100,000. Nearly 52% of the adult population holds bachelors or advanced degrees. The median home value within 1 and 2 miles of the property are $331,000 and $296,000 respectively.

S&P Global demographic data obtained cited median household income of $106,475 within one mile of the Property. The Properties’ submarket as a whole appears to be relatively affluent as well. The appraisals state that the combination of modest job growth, a trend toward more efficient space planning, and a newfound affinity for urban office space is working against suburban submarkets, including the Properties’ Brookfield/New Berlin submarket, which has been grappling with above- average vacancy for about a decade. However, current vacancy is near historical averages for the submarket. Rent growth in the submarket has been disappointing as, according to the appraisals, it has been essentially flat over the past decade, during which it had as many years of losses as gains. The appraisals discussed the possibility that Fiserv,Inc., a submarket mainstay since 1992 with a 190,000-square-foot footprint, would relocate to downtown Milwaukee or even move its headquarters and 900 employees from Wisconsin. It has a large hub in Atlanta, with a footprint about twice as large as the Brookfield headquarters, making it a possible relocation target. Company executives have bluntly stated that in Milwaukee it is difficult to get the best talent since many workers prefer to live in “hipper” metropolitan areas. In January 2019 Fiserv announced $22 million billion all-stock acquisition of New York-based First Data Corp. As of May 2019, Fiserv stated that its search for a new office in Wisconsin was being put on hold as the company focused on its pending acquisition. Should Fiserve leave, this would result in a large vacant office building further depressing occupancy.

The Tenant inherited the Properties and employees working in the buildings through its 2010 acquisition of Marshall & Ilsley Corporation (M&I). According to Livingston, M&I (and its successor, BMO) has occupied the 180 Property since 2006. Further, M&I acquired the 401 building in 1999 and subsequently developed the 395 building on the same site in 2008. Note that the current Property leases were executed in 2017. According to the PPM, the Tenant currently uses the 180 building for bank operations, loan processing, customer service and general administrative uses. The 395/401 buildings are used as general offices and for training and customer interface. Management represented that there are currently 1,050 BMO Harris employees in aggregate at the Properties, an increase from approximately 750 in 2017. The Tenant has committed to the Milwaukee MSA, evidenced by being the anchor tenant with naming rights in the new 25-story, 380,000-square foot BMO Harris office tower in downtown Milwaukee (BMO Harris will occupy 124,000 square feet). This will be BMO Harris’ Wisconsin headquarters. It has been reported that this tower will serve to consolidate multiple downtown office locations for the bank’s 3,000 employees in downtown (east) Milwaukee. BMO Harris is expected to move in during January 2020. Terms of the lease were not disclosed. The Tenant has spent an aggregate $2.6 million on interior, mechanical, and structural systems at the Properties over the past two years. Table 16 shows the breakdown per building as provided by the Tenant. Additionally, the selling broker represented that the Tenant has spent additional funds on interior renovations, including renovating the third floor of the 180 building. The Tenant represented that these renovations were in excess of $4 million. The Tenant is also planning to replace the roof at the 180 building during 2020. BMO Harris’ significant real estate presence within the Milwaukee MSA is positive in that it demonstrates its commitment to the geographic area and the local workforce. However, the large amount of leased office space also presents a risk: if the bank were to consolidate further, some of the office buildings it leases would go vacant. A BMO Harris spokesman wrote in an email to the Milwaukee Business Journal, “We still have long-term leases on these buildings, and yes, these operations will remain in the Brookfield location after the new BMO Tower opens.” This provides comfort that for at least the foreseeable future the Tenant should continue to occupy the Properties. It is common for large organizations to periodically reassess their office space and FTE needs; thus, the long-term prospects are unknown.